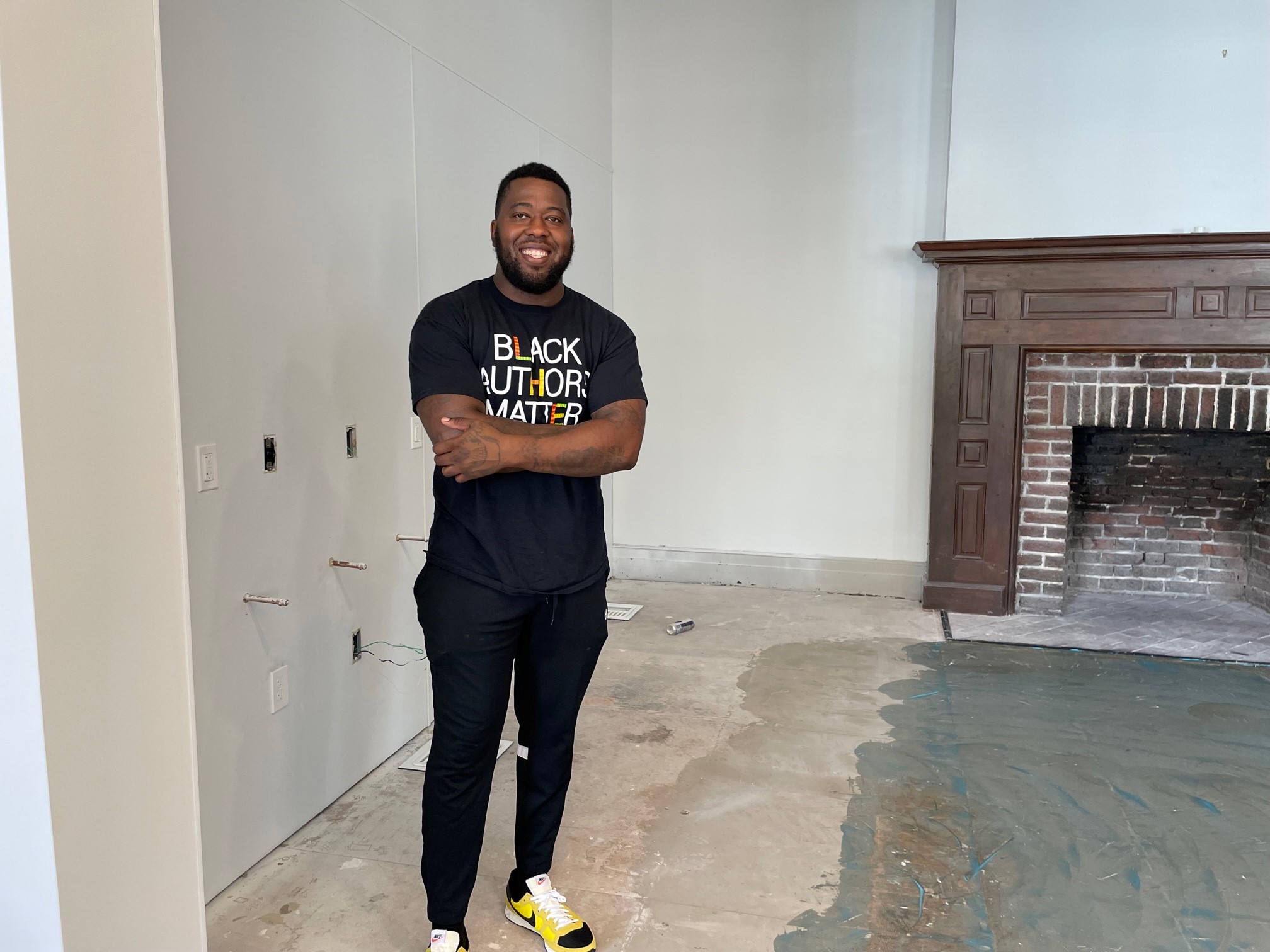 “Who doesn’t enjoy a good cup of coffee while they’re browsing for books?” Stefan Hawkins wonders. “Or who doesn’t enjoy getting a book while waiting for coffee? Coffee and books go hand in hand.”

Hawkins will soon be proving his point as his Good Brotha’s Book Café is coming inside The Library’s renovated McCormick Riverfront Library. Plans have been brewing – pun intended – for more than a year.

A Good Brotha’s café will be open for service when the revitalized space holds its grand opening sometime this fall.

It’s a match made in heaven. Library members and users have long wanted coffee in the historic McCormick Riverfront Library space. Good Brotha’s Book Café is the Midtown Harrisburg coffee shop that opened in January 2021 with a mission of expanding access to titles in Black and African-American literature.

Library users yearn for coffee because they want to be comfortable in “that third place outside of work and outside of their home,” says Community Engagement Strategist Nick DiFrancesco.

“Visitors want amenities, and a cup of coffee or a latte is something they can get excited about,’’ DiFrancesco says. “It gets even more exciting working with Stefan. He’s a community-minded guy. He’s always thinking big, and he’s always thinking about how partnerships can build up culture in the city. That’s exactly what we’re trying to do with the renovation project. The partnership becomes a little bigger than a coffee shop because of Stefan, the work he wants to do, and our mission here at The Library.”

DiFrancesco and Hawkins see a symbiotic relationship where The Library and the coffee shop connect with each other’s constituencies. The Library could attract new members among coffee drinkers learning what The Library has to offer. Good Brotha’s gets a convenient space for author readings and book signings.

Hawkins brought books to his café so he could share his love of reading. He easily imagines himself in the stories, vicariously tracking down killers via James Patterson’s detective Alex Cross or attending Hogwarts with Harry Potter. It was J.K. Rowling’s Harry Potter series that introduced Hawkins to reading when he was about 10 years old.

“I love to escape reality,” he says. “Just being able to dream of riding a broom and playing quidditch or having special powers – the idea that there’s something more to the world than what’s in front of you, and I can aspire to be something.”

Still, in his childhood reading, Black characters mainly were historical figures in biographies.

“I want to get more kids in inner cities, and urban environments into reading, and the best way to do that is to see somebody that looks like them doing things they can do. Imagine if Harry Potter was Hakim Potter, and he was Black,’’ Hawkins says. “You see that and think, ‘I could play quidditch. I could take down Slytherin House.’ See that, imagine that, and push them toward literacy.”

Imagination has contributed to Hawkins’ career as a serial entrepreneur, forever seeing opportunities. He realized later in life that while he could comprehend a plot, he couldn’t read big words in the books he devoured.

“I felt like the school system had failed me,” he says. “I wanted to try to help change that narrative with African-American kids. We can read books. We can be intelligent, and the best way to do that is to show them somebody who looks like them.”

For the café space in the renovated McCormick Riverfront, Library staff worked with Hawkins and the project architect to bring a new type of coffee shop to downtown Harrisburg.

“I see this as more than a service for The Library’s members,” says DiFrancesco. “This is something the community can take advantage of. Having Stefan at The Library is going to be a cool new feature in itself. It’s a symbiotic relationship. It’s a service for members, but also brings people in on their own.”

Comfy chairs and tables will make the space “feel like the community’s living room,” he adds. Hawkins, too, promises “cozy comfort.”

The initial ideas for serving coffee in McCormick Library were stripped-down – perhaps served in airpots, and provided by a rotating lineup of local providers. But Executive Director Karen Cullings and DiFrancesco were impressed with Good Brotha’s customer service, tasty coffee, and commitment to literacy, plus their work with Hawkins through previous partnerships with The Library.

“At that first meeting, it went from having [containers] for serving his product to ‘How do we get a full-service coffee shop in the library?’” DiFrancesco says. “Next thing you know, we’ve got this huge project in front of us.”

The café will offer a few coffee-friendly food choices, such as Danish and pastries. As for the coffee menu, Hawkins is considering, at The Library only, adding a small 99-cent offering he calls his “buck coffee.”

“Anybody can find four quarters,” he says.

The Library and Hawkins are mutually committed to good books and good coffee – a match made in McCormick Riverfront.

“It’s supposed to bring another option downtown that’s good or better than the coffee offered there,” Hawkins says. “I think we can get people in the door.”