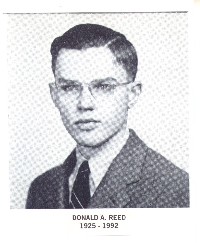 “Never Say Can’t Until You Try.”

That was the motto of the Hummelstown High School Class of 1943 and it might well be a lifetime motto for Donald Albert Reed, who was both president and valedictorian of that class and who later demonstrated time and again his willingness to “try” hard on behalf of his country and his community.

Born in Oberlin to Morris and Clara Cockley Reed, Donald Reed grew up in Hummelstown and progressed from the old Price Elementary School, through Junior High and High School.

A bright young man, he entered Drexel University in Philadelphia following service in the U.S. Army in World War II, during which he fought in the “Battle of the Bulge.” He was among those who took advantage of the G.I. Bill for his college education. Excelling at Drexel, he continued on and received a Master’s Degree in Business Administration from Temple University in Philadelphia.

While it isn’t known if he held another job before joining Armstrong World Industries, he stayed with them for the next 39 years, retiring in 1989 as chief accountant of employee benefits.

In 1980, Reed was designated one of 167 charter-certified Employee Benefit Specialists by the International Foundation of Employee Benefit Plans and the Wharton School of the University of Pennsylvania. He had also been named most valuable member of the Lancaster Chapter of the National Association of Accountants for 1959-60.

The Bulletin, the monthly magazine of the National Association of Accountants, published an article by Reed in January 1960. The article was titled “A Pilgrim’s Progress Toward Electronic Data Processing,” putting Reed out front in the coming revolution of computers. The article presented an approach for companies in the purchase and use of computers based on Armstrong’s experience.

None of this was a surprise to his Hummelstown High classmates. In their yearbook, which he edited, his classmates called him Most Influential, Most Studious, Most Likely to Succeed, Quietest and also destined to be a Bachelor.

Herb Eckenroth, a classmate and one of his best friends recalls him: “He was shy, modest and personified what I think our moral standards should be in this current changing society. He was an only child and was polite, courteous and soft spoken but always maintained a certain air of dignity to others. He was a reverent man and a brilliant student, graduating at the head of our class (1943).

“I recall specifically one time when he preached a sermon in our church (Evangelical United Brethren) and it was outstanding. He was not a complainer and carried himself as though he possessed all the confidence and trustworthiness required to pass over the next hurdle.”

His classmates had him pretty well pegged, as he quietly rose through the ranks at Armstrong World Industries and he never married.

When he died at age 67 on August 6, 1992, he was the last member of his family. However, Hummelstown had never left his mind and was as close to “family” as he had left. Thus, when his estate was settled, he left his “family” a total of one million dollars – a quarter million each to Trinity United Methodist Church, The Hummelstown Fire Company, The Hummelstown Area Historical Society and … The Hummelstown Community Library.

Donald Reed’s generous bequeath to the Hummelstown Community Library grew to more than $300,000 and was the financial bedrock which permitted the Dauphin County Library System to move ahead and purchase the site for the library in Hummelstown.

Each visitor who enters the library is greeted by the Donald A. Reed Plaza, the outdoor area where library users often stop to read or rest.