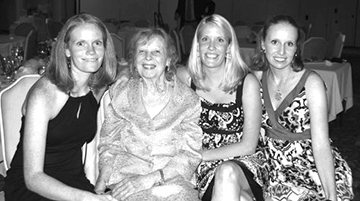 The Hummelstown Community Library Capital Campaign was a perfect fit for the S. Wilson and Grace Milliman Pollock Foundation because both are interested in children, education and life-long learning.

The foundation, founded by S. Wilson Pollock, an engineer on the Manhattan Project and former vice president of engineering at AMP, and Grace Milliman Pollock, a former Broadway actress and ballerina, is dedicated to improving the lives of others in the community through charitable giving to many causes, including scholarships, libraries, educational institutions and community organizations.

Board members and sisters Lauren Pollock Cacciamani, the late Courtney Pollock Gordon and Lindsay Pollock were very familiar with the Hummelstown Library. They grew up participating in programs at the library, that was then located on South John Street. They checked books out regularly while attending story times in the children’s room in the basement. Lindsay fondly recalled reading the antics of The Jolly Postman, while Courtney and Lauren reminisced about reading The Little House and Katie Morag Delivers the Mail. All graduated from Lower Dauphin School District, and Courtney continued to be involved with literature as an elementary teacher. Prolific readers, they enjoy contemporary novels, and consider the library instrumental in making them aficionados of fiction.

The Pollock sisters were thrilled to have the opportunity to give back to the library where they spent so much time when they were growing up and to their community of Hummelstown.