An Interview with Lauren Castillo 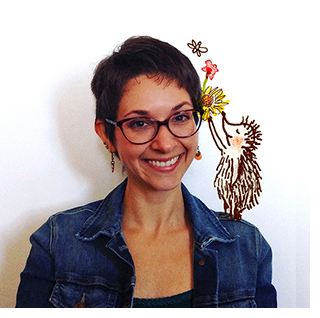 Lauren Castillo is The Library's featured author for Children's Book Week 2017. Lauren studied illustration at the Maryland Institute College of Art and received her MFA from the School of Visual Arts in New York City. She is the author and illustrator of the 2015 Caldecott Honor winning book, Nana in the City, as well as The Troublemaker and Melvin and the Boy. Lauren has also illustrated several critically acclaimed picture books, including Twenty Yawns by Jane Smiley, Yard Sale by Eve Bunting, and City Cat by Kate Banks. She currently draws and dreams in Harrisburg, PA.

I try not to choose favorites when it comes to the books I make, but I will bend the rules and say Nana in the City, for both writing and illustrating. This book holds an extra special place in my heart because it was inspired by my own Nana who I used to visit in NYC every summer as a child.

What is your favorite picture book that has come out in the past year or so?

Gosh, this is a tough one! There are quite a few newly published picture books that I love, but I think the one that I connect with most is Windows, by Julia Denos and E.B. Goodale.

What did you like to read when you were a kid?

Some of my favorite picture books as a kid were Imogene’s Antlers by David Small and Henry’s Awful Mistake by Robert Quackenbush.

What books would you most like to read again for the first time?

I would love to read Charlotte’s Web by E.B. White again for the first time. That book was magic when I first read it as a kid. I read it again recently, and it is still magic. A perfect book.

What are you reading right now?

I’m re-reading The Trumpet of the Swan by E.B. White. And I’m also reading The Creativity Project: An Awesometastic Story Collection. It is a really fun book edited by Colby Sharp, with contributions by over 40 authors and illustrators (I had the honor of being one of them).

As The Library, we love the Harrisburg area and the people who live here. What drove you here?

My author/illustrator friend Jonathan Bean is from this area, and he is the one who convinced me to move to Harrisburg. I’m so happy that I did! I love the charm of midtown Harrisburg, and living only two blocks from the beautiful Susquehanna River.

You won a Caldecott Honor for Nana in the City in 2015. What was getting that news and then the award like?

I was in complete shock when I received a phone call from the Caldecott Awards Committee letting me know that my book had won an honor. Two years later, and it still shocks me a bit to see one of those shiny stickers on my book! I am so honored that the committee selected Nana as one of their honor awards, and I will never forget the incredibly special awards banquet, and the joy I felt on that dreamy evening.

What’s next for you and your work?

I am currently illustrating a picture book by U.S. Poet Laureate Juan Felipe Herrera titled Imagine. I’m also working on a companion book to Nana in the City, titled Nana in the Country. It has been a fun year in the studio!

The above piece represents the views of the author and is meant to inspire dialogue and increase understanding and a sense of community. The opinions expressed do not necessarily represent the views of The Library. Members are welcome to comment below or contact us privately by using our online contact form >