An Interview with Singer Angela Easterling 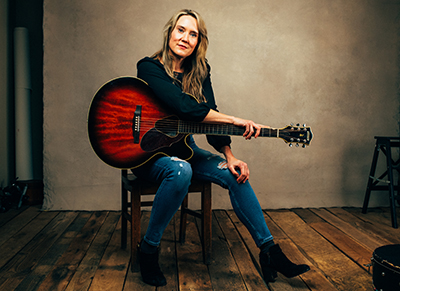 Despite having grown up in South Carolina, Angela Easterling wouldn’t have called herself a “country girl.” Instead, Angela would align herself with the music of the stage, finding herself more drawn to the likes of Judy Garland than Judy Collins. Since the age of 11 or 12, Angela was interested in musical theatre – she would follow that interest to a specialized performing arts high school, and on through a musical theatre degree at Emerson College in Boston. “I’m kind of a … shy person on an interpersonal level,” Angela tells me, “but I’ve never been shy to get in front of people. Being shy, performing kind of helped me be able to express myself, feel like there was a place where I could express myself.”

In college, inspired by singer-songwriters like the Indigo Girls and Tori Amos, Angela bought her first guitar and learned how to play. Soon after, when she first began writing and performing original music for friends, Angela started to hear the word “country” being used to describe her. “People around me told me, ‘You write country songs!’ but I just didn’t get it!” she says, with a laugh. Angela kept writing and performing, and learning about herself as a musician. “Writing music,” she tells me, “put the power in my hands as far as creating opportunities for myself to be able to perform.” 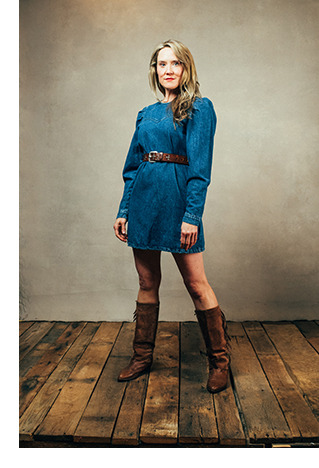 Ironically, it wasn’t until her post-college years playing music and acting in Los Angeles --  far away from her South Carolina roots -- that Angela discovered the work of country music star, Emmy Lou Harris. “When I heard Emmy Lou,” she tells me, excitedly, “it was like the whole world opened up for me as far as music. Angela was inspired not only by Emmy Lou’s original music, but by her multitude of popular covers, which reimagined the works of artists like Hank Williams, The Carter Family, Johnny Cash, and Simon & Garfunkel in her signature, lilting style. “I remember thinking, well, if that’s country music,” Angela tells me, “then I’m okay with people thinking I make country music!” Now, Angela leans into her “country” sound. “Everything I do has that.. flavor to it,” she says, “whether you want to call it ‘Southern’ or ‘alt country’ or ‘Americana,’ everything that I play has that little bit of twang to it.”

If Country Music isn’t quite your “thing,” though, Angela promises you’ll still enjoy her upcoming show at The Library. “If you say to yourself ‘I don’t know about going to see some singer-songwriter play a bunch of songs I don’t know’,” Angela says of hesitant concert attendees, “You will most definitely enjoy Brandon’s guitar music!” Brandon Turner is Angela’s “partner in music and life,” a highly talented guitarist, who’s played with the likes of Ricky Skaggs and Danny Lou Harris. “We try to put on a full show, where you’ll be entertained by Brandon’s skills on guitar, even if you don’t like singer-songwriter-type music,” Angela says. “I tell stories and talk, and we just have fun up there! We keep it rollin’, keep it jumpin’. We love what we do and we hope people come out and have a good time!”

Angela’s upcoming album, Witness, will be her first in seven years. It was supposed to have been released in 2020, but with the onset of the pandemic, the album was delayed. “It’s something that’s been a multi-year work in progress,” Angela says, “of working in between picking the kids up from school and taking them to soccer, and then running around to play shows and travel, and running around again to play in the studio when we could record.” Witness, Angela explains, was titled in reflection of tumultuous times. “I called it ‘Witness,’” she says, “because there has been so much upheaval in our lives and in our country over the last few years. Many of the songs are reflections of what I’ve seen in my life and in my family’s lives.”

One of the songs on the album, “Have You Seen My Friend?”, describes an unhealthy, codependent friendship that’s turned sour. Angela tells me that in this song, she’s really describing her feelings about our country. “I realized I just don’t understand what’s going on,” she says, “but then again, maybe I never did – maybe this was always going on, and I only just realized it.” This feeling of revelation, Angela continues, was the driving force behind much of the album. “Part of the reason I wanted to put this out and call it ‘Witness,’ is that I have a lot of hope for the future. We just have to be aware of what’s going on so that we can change it.” 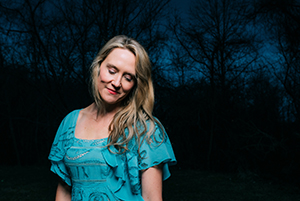 Another song off the album, “Grow Old,” was written at the start of the pandemic. “I just kept thinking, what’s one thing I want from my life, because all of a sudden there’s… nothing going on,” Angela tells me. Suddenly, everything in the world felt different. “We had a newborn baby in May 2020. Everything was still really quiet and shut down. We were still wiping our groceries when we got home from the grocery store -- we just didn’t know what was going to happen next.” Angela explains that she channeled all her fear and uncertainty surrounding the future into “Grow Old,” a song about wanting – more than anything in the world—to watch her children grow. “I looked at this tiny little baby who I’d just met, and I looked at my kids who were not much older than him,” she tells me, and I choke back tears, “and I thought about how badly I wanted to see their lives and how they grew, the choices they would make and how they messed up and how they would succeeded, and who they would become.”

If you’re not able to come out on Friday night, be sure to check out Angela’s upcoming album, Witness, after its release! Until then, why not check out some of the books that have had influence on Angela’s life and music?

“The book,” Angela muses, “is a beautiful meditation on life after death, it’s very profound. The narrator is looking at her family as they’re going through processing her death. They each have their own grief, they each have their own thing that they miss about her, but she’s removed from it. She doesn’t have an emotional connection, she’s just an observer.”

Another one of Angela’s picks is Unexampled Courage by Richard Gergel, which inspired her song, “Isaac Woodard’s Eyes.” 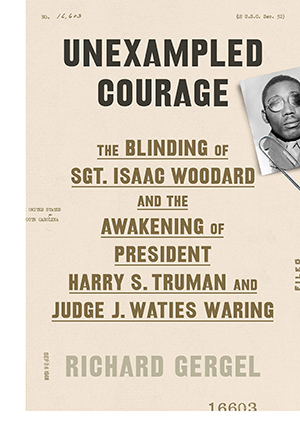 Angela tells me that she’s shocked that so few people know the story of Isaac Woodard. “He was a World War II Veteran, an African American man, who was headed home to meet with his family in 1946,” she informs me, “when he was pulled off a bus, beaten, and blinded by police in South Carolina.” Angela goes silent for a moment before telling me, “The reverberations of what happened to him are what led to President Truman desegregating the military, and ended up having a huge bearing in the Brown versus Board of Education case. He should be at the level of familiarity with people like Rosa Parks.”

Currently, Angela lives with her husband, Brandon, and their three boys on a farm in South Carolina that goes back in her family over 200 years. “I’m not famous or anything like that,” she tells me, “But I still get to make a living doing what I love, and I have my family, and I just feel inordinately blessed to be doing what I do.” Since the start of the Covid-19 pandemic, this concert in Northern Dauphin will be the farthest Angela and Brandon will have travelled to play a show.