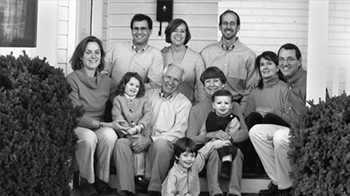 Marion C. and William H. Alexander are well-known in many Harrisburg area circles for what they give back to the community, both locally and regionally. Born in Harrisburg and reared respectively in Paxtang (Marion) and Colonial Park (William), they were classmates in and graduates of Central Dauphin High School. Both have continued to support the region where they were born and raised, tirelessly supporting many worthwhile efforts, both large and small. Together they have served as Campaign Chair for the United Way of the Capital Region and each has served as Chair of the Board for that organization. Each also was a recipient of the John Baum award. Jointly, they received Theater Harrisburg’s Award for Distinguished Service to the Arts.

Marion has received many additional awards and accolades, including the YWCA”s Women of Excellence Legacy Award, an Arts Innovator Award, Alumna of the Year at Harrisburg Academy, and, in 2008, was awarded an honorary doctorate from HACC. A listing of her board service and campaign chairmanship reads much like a directory of the Harrisburg regional associations.

But the Alexanders’ devotion to community does not end with asking others. Their own generosity has benefited many causes, not the least of which is the new library for Hummelstown. Their munificent gift was the catalyst for planning the local library when they rose to the challenge set by the Dauphin County Library System. A long-tenured member of the DCLS Board of Trustees, Marion Alexander and her family responded by donating the amount established for the naming right of the new library and set the Hummelstown campaign on its way.

Karen Cullings, Community Relations Director for the DCLS says, “Marion has set a truly exemplary example of dedicated service. She's held all offices of the Board including President and chaired many committees, most recently the Development Committee. Library staff and her fellow Board members respect her for her strong sense of mission in raising funds for the library, her frank assessment of issues and her unwavering attention to the goals on which she has set her sights. Personally, I have been inspired by her unflinching support of the library system and the way in which her heart, which is behind the library's mission 100%, is often ‘on her sleeve,’ whether she's discussing an operational issue or asking a community member for funds to support a library project.”

Others locally who have worked with Marion on the Blue and White Gala for the Lower Dauphin Falcon Foundation praise her commitment to the place she calls home, “She is tireless in seeking all avenues of support for this community and its schools,” notes Vice-President Judith Witmer. This clearly reflects what the Alexanders themselves say about Hummelstown, “We love the town, love the people.”