I’ve only been a mom for a little over a year. I have always known I would read to my baby as much as possible. Of course I would! I’m a librarian! Before I was a mom I was the auntie (to my sister’s kids and my friends’) who always bought books for birthdays and holidays. I always tried to purchase books with interests and comprehension levels in mind, and later on, that kids would be able to read for themselves, even if they only picked out a few words to start.

It was after the string of killings of young Black men and boys in 2014: Michael Brown, then Tamir Rice, that I began to really examine the characters in books I was giving as gifts. Did they have only white characters in them? Or just animals? I wanted these important kids in my life, mine included, to see lots of different kinds of characters with different skin tones and with different appearances. Even now, despite my best efforts, my daughter’s bookshelf contains lots of books with white faces in them, many about bunnies, and one with smiling cooking utensils. The Cooperative Children’s Book Center at the University of Wisconsin-Madison examined publishing statistics from 2018 and found that 77% of children’s books depicted characters who were either white or animals/trucks/etc. Here’s the infographic that was created to show these statistics: 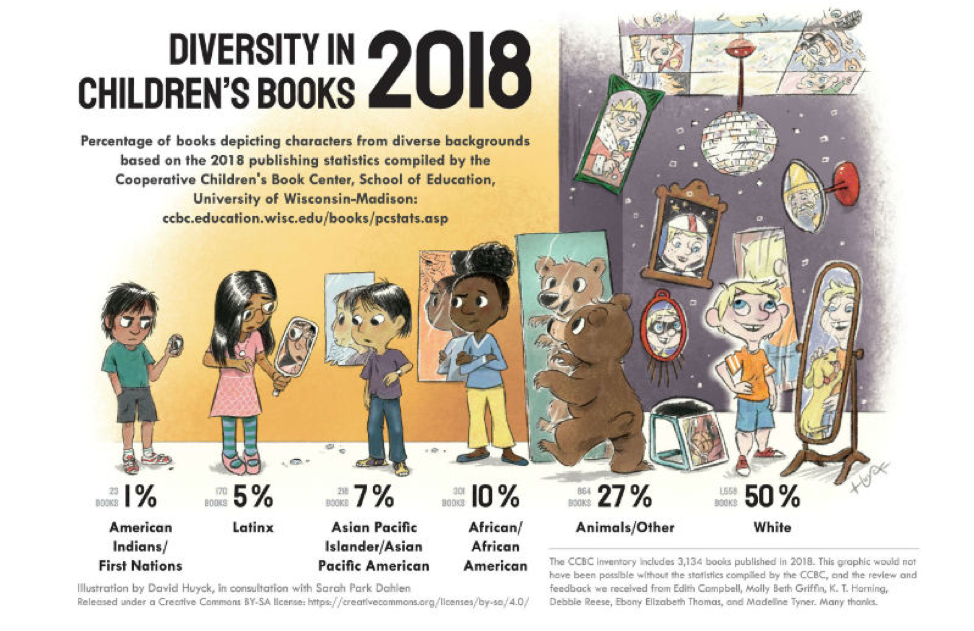 Representation matters. Rudine Sims Bishop, back in the 90s, coined the phrase “mirrors, windows, and sliding glass doors” to think about representation in children’s books. See a 2 minute video of her discussing that idea here. Children need to see themselves reflected in books (a mirror), they need to see into other cultures (a window), and they need to be able to enter those worlds (a sliding glass door). Children need to be able to see themselves and to explore other cultures in all forms of media to imagine the possibilities of what they can be. Antiracism for everyone can start in these representations in media, with everyone being portrayed accurately, sufficiently, and complexly, but we’re The Library, and we specialize in books, so that’s what we’re talking about here.

Last week we shared some books that were compiled by a team of us here at The Library and in the Harrisburg community that offered some suggestions for books to read to promote antiracism. There are some great children’s books on there, but over the past few weeks lots of resources have been shared for parents around the internet on antiracism for kids, and we’ve compiled some of those here for you, with a special emphasis on books.

But first, a definition for what it means to be anti-racist from Ibram X. Kendi’s book, How to Be An Antiracist:

"To be antiracist is to think nothing is behaviorally wrong or right -- inferior or superior -- with any of the racial groups. Whenever the antiracist sees individuals behaving positively or negatively, the antiracist sees exactly that: individuals behaving positively or negatively, not representatives of whole races. To be antiracist is to deracialize behavior, to remove the tattooed stereotype from every racialized body. Behavior is something humans do, not races do."

At The Library, we’ll keep collecting as many books as we can about all different kinds of characters and featuring lots of different races. They’ll all be here for you, and if you would like for us to pick some out for you, fill out our Book Advisor form and we’ll get you started.

> > Looking for a more complete list of titles in our collection?

> > Help us by suggesting other titles to add to our collection on this topic.

The above piece represents the views of the author and is meant to inspire dialogue and increase understanding and a sense of community. The opinions expressed do not necessarily represent the views of The Library. Members are welcome to comment below or contact us privately by using our online contact form.