For the safety of our youngest members, face masks are required while inside all of our libraries. If you are unable to wear a mask, curbside and electronic services are available. See more details.
COVID-19 Vaccine information > 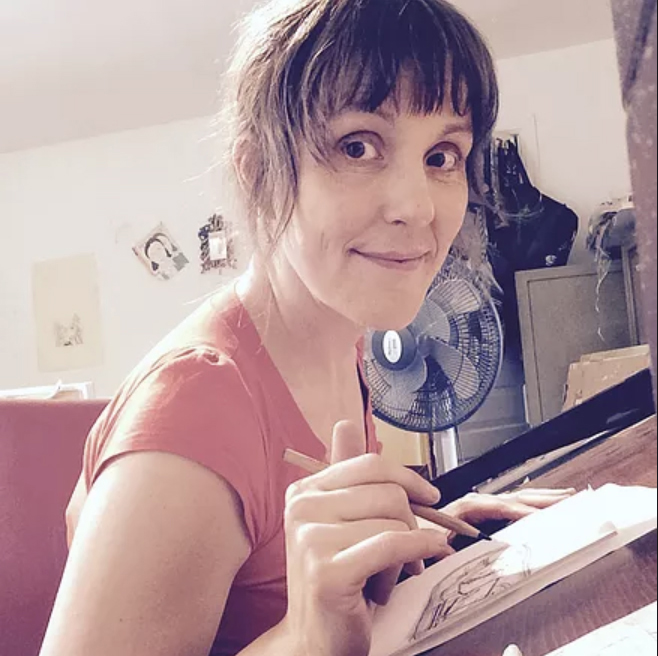 Amy June Bates’ home in Carlisle is one block from a library, “which is fantastic.”

Those spaces attracted Bates as a child, who would “go and sit there and sit there. I’d get a big stack of books. It felt like I was eating.” As an adult living in Japan for three years – her husband teaches Japanese literature at Dickinson College – she discovered Japanese libraries and their books from different cultures.

“Reading is, fundamentally, learning other people’s stories,” she says. “The best way to teach empathy and the experiences of others is to read.”

What are you reading? On my bedside table right now are The Ghost Variations by Kevin Brockmeier. It’s 100 short stories about different kinds of hauntings. It’s so fun. I’m reading Sisters in the Resistance: How Women Fought to Free France by Margaret Collins Weitz. I love learning about stuff that I simply didn’t know. The graphic novel The Gigantic Beard That Was Evil by Stephen Collins is awesome. For middle-grade books, my kids love Moribito and have been telling me to read it. Kids’ books I like are Rules of Summer by Shaun Tan and We Became Jaguars by Dave Eggers and Woodrow White.

What do you like about graphic novels? It’s visual storytelling. I like the experimentation. We’re in a golden age of appreciation for graphic novels. I’m always interested in new ways that people make books, and new ways to see and make stories. There’s a million ways books have been done, but also a million more ways that they haven’t, and I love it.

Why should grown-ups read kids’ books? A picture book is slower, in the way it deals with time and the ability to show a whole scene. There’s a window, and you, the viewer, can step into this world. With children’s books, you can be more magical and simple, but that doesn’t mean it’s trivial. People tend to write off children’s books as simplistic, as if “childish” is a negative term, but I think of it as a beautiful term. To do it well is every bit as complicated and possibly just as rare as any other book form. I advocate that everyone keep an open mind. You never know what book can expand your horizons.