For your safety, face masks are required while inside all of our libraries and members are asked to limit their visits and computer usage to 1 hour.
If you are unable to wear a mask, curbside and electronic services are available. See more details. 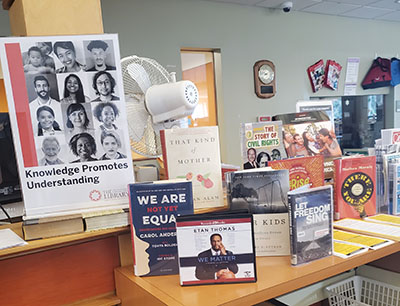 When conversations get intense, context is crucial to understanding. Lizzy Baldwin, Youth Services Specialist at Northern Dauphin Library, wanted her book display to match The Library’s messaging on social and racial justice.

So, she had an idea. Why not create book displays at every library showing some of The Library’s reading list suggestions for understanding the complexities of racial and cultural relations in America?

Baldwin submitted the idea to Executive Director Karen Cullings, who loved the concept and gave it the green light. Enthusiastic managers ran with the idea, and now, Knowledge Promotes Understanding displays appear at libraries throughout the system.

“We have many passionate staff members invested in social justice,’’ says Public Services Director Lori Milach. “They want to make sure the message gets out that we have the resources available to help promote understanding and to provide materials on various points of view.”

With the displays, The Library’s members and visitors can peruse such titles as We Are Not Yet Equal and For Black Girls Like Me, shown with signage explaining The Library’s role in encouraging dialogue and building community. Bookmarks offer additional suggested titles from The Library’s Knowledge Promotes Understanding reading list. 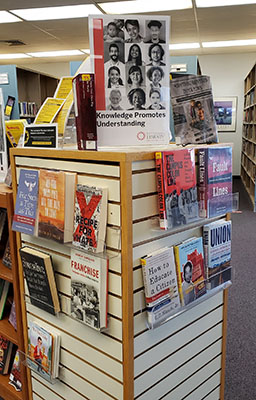 Baldwin sees her role as highlighting the message that libraries are informational powerhouses that are not neutral in the drive for racial and social justice.

“My thing was to make sure that Black teenagers felt welcome,  valued and protected in our libraries,” she says, adding that she hopes the displays reach kids of all backgrounds and races.

Book displays spotlight titles that might be unfamiliar to library visitors but pique their interest, just like impulse buys at retail stores, Milach says.

“You check out the book because it looks interesting. Other people might see the topic and think it’s interesting, so they do their own research,’’ she says. “It’s hard for us to know how many people are affected by a display, but our hope is always that it engages people.”

Cullings says she is proud of The Library staff’s commitment to visibly heightening The Library’s social justice leadership.

“The Library launched its Knowledge Promotes Understanding webpage in the wake of the heartfelt, nationwide protests over the death of George Floyd and inequality,” Cullings says. “The Knowledge Promotes Understanding displays underscores our commitment to providing library members and visitors access to powerful resources for learning and joining a constructive, productive dialogue.”

Among her youthful audience, Baldwin has seen that the most popular titles are staples of reading lists, including Stamped: Racism, Antiracism, and You, The Hate U Give, and On The Come Up.

“It’s important to let them discover their own views and have difficult conversations,’’ Baldwin says. “They’re capable of it. If we give young people the opportunity to think critically and the chance to think for themselves, it’ll make them not only better people but better citizens.”